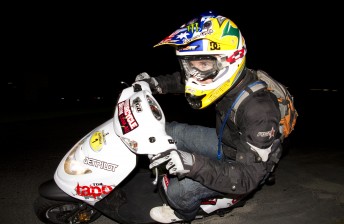 He may not be the Wollongong Wiz Wayne Gardner, but Illawarra’s Mark ‘Brownie’ Brown has achieved something the 1987 World 500cc champion has not – setting a new Guinness world record for the longest distance travelled on a 50cc scooter over 24 hours.

Brown completed 1189.685km in his Scooter Shop entry at the Insure My Ride Le Minz 24 Hour Scooterthon presented by TGB Scooter and the Australian Motorcycle & Scooter Expo on the Gold Coast.

“It’s the fifth time I’ve done Le Minz solo and I’m stoked to get the record back,” said Brown.

“This will be my last solo attempt but I’m looking forward to doing it again with a team.

“It was a great event and everyone looked like they had a lot of fun. Thanks to InsureMyRide for sponsoring the event and TGB for supplying the perfect scooter for such a huge endurance test.”

14 teams and 43 participants completed over 20,000 laps of the 665m closed course Parklands track with the reliability of 50cc scooters tested to extreme measures, running non-stop for the 24-hour period. 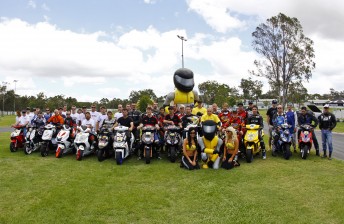 “Best day ever! Let’s do it again – sore quaddies but at least I didn’t fall off,” posted AFL legend Peter ‘Spida’ Everitt on Facebook.

Luke Smith from InsureMyRide said the company was proud to be part of such a unique event.

“Le Minz is one of the most fun and entertaining events going around on the Australian motorcycling scene,” said Smith.

“InsureMyRide is proud to be the major sponsor of such a great event that supports both local charity and the motorcycling community – bring on next year’s event!”

The event raised close to $2000 for its nominated charity, ‘Give Me 5 for Kids’, supporting the children’s wing at the Gold Coast Hospital.

Many of the scooters will be on display at the Australian Motorcycle & Scooter Expo from the 17th -19th of February 2012, at the Gold Coast Convention & Exhibition Centre.