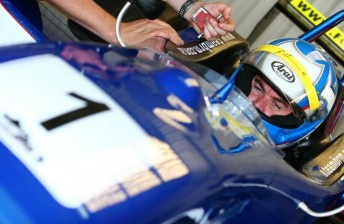 Held at South Australia’s Mallala circuit – the home venue for both Team BRM and R-Tek Motorsport, the day saw nine rookie drivers take to the track.

According to Richards, who forms a key part of Formula 3 management in addition to his role as R-Tek team owner, the drivers took a measured approach to learning the wings and slicks cars.

“Overall there was a very high standard of young drivers present on the day and there is no doubt each of them could be successful in Formula 3 if they wanted to go down that career path,” said Richards of the drivers.

“Each and every driver that sat in our cars made significant improvement throughout the day and all took a very level headed and mature approach to a day that wasn’t about setting the fastest lap, but about learning what these cars are capable of.

“Now they have an understanding of what the cars can do and the engineering that goes on behind the scenes.”

Echoing Richards’ thoughts, Rundle also said that the test will prove beneficial to the two participating teams as well as the nine drivers.

“Even though the three guys we ran came from vastly different backgrounds and had such different levels of experience they each genuinely impressed in their own ways,” said Rundle.

“We were pleased to be involved in the day and it has opened up our eyes to some of the talent out there that might not be well known to the wider racing community just yet.”

R-Tek confirmed at the test day that its 2011 Forpark F3 Scholarship winner Steel Guiliana will return to the team next season to take on the outright title. CLICK HERE for Speedcafe.com’s previous news story.

A new team, Harvest Motorsport, is also set to be on the grid with a Mygale M-08. CLICK HERE for Speedcafe.com’s previous news story.

The 2012 F3 Australian Drivers Championship will kick-off at the Clipsal 500 Adelaide on March 1-4.