Just days ahead of the deadline for manufacturer entries in the World Rally Championship, Ford has confirmed its official participation for the next two seasons.

Ford of Europe made the announcement for 2012 and 2013, along with the continued partnership with British-based preparation company M-Sport, plus the addition of 2003 World Champion Petter Solberg alongside team leader Jari-Matti Latvala.

Solberg was back behind the wheel of Ford at a test in France in preparation for next month’s WRC opener – the Monte Carlo Rally.

The Fiesta RS World Rally Car squad will be named Ford World Rally Team and will retain support from long-term partner Castrol for both 2012 and 2013.

“Ford has a rich history in world rallying and we’re excited to continue fighting for titles on the world stage with our great partners at M-Sport,” said Ford of Europe chairman and CEO Stephen Odell.

“WRC is a great fit with the Ford brand DNA of precise handling, fun-to-drive cars with leading technology and we’ll continue to leverage rallying to inspire innovation in future vehicles and reach new audiences.”

“We feel that the timing for our announcement is right,” said Quinn.

“We had to be confident about the stability of the championship and to ensure it continues to provide great value and increased exposure globally. We discussed it with our stakeholders and after receiving such assurances we look forward to focusing on competition once again,” said Quinn. 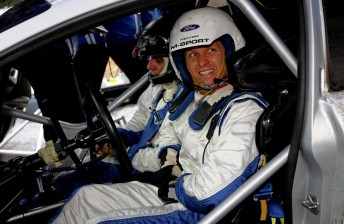 “We have a great team with M-Sport and its leader, Malcolm Wilson, and in Jari-Matti Latvala we have one of motorsport’s rising stars. Already regarded by many as the fastest driver in WRC, this year he showed consistency and expertise on all surfaces. We believe he will flourish in his new role as Ford’s team leader, and look forward to seeing his pace light up the special stages around the world.

“The addition of Petter Solberg to the team brings one of the sport’s most experienced and flamboyant drivers back to the team where he started his top-level career. A drivers’ world title and 13 world rally victories are testament to his abilities and his vast experience will be a great asset to our line-up.”

M-Sport recently completed its ladder of opportunity, adding a first rung to complete a structured path to take young and talented rally drivers from the grass-roots to the top level in Ford Fiestas. From the entry-level MS1 car, drivers can progress via the increasingly more powerful R2, S2000 and Regional Rally Car models to the top-billing World Rally Car.

“Ford has five different Fiesta models in which drivers with potential can graduate from entry level to the WRC. This ladder is the breeding ground of Ford’s future stars, and in the next seasons we will see drivers with ability climb it and begin to emerge at the top,” he added.

Check out Latval testing for the Monte Carlo Rally