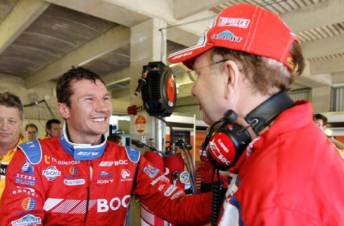 Brad Jones Racing says that the V8 Supercars history books do not show how good Jason Richards really was.

Richards, 35, succumb to his battle with cancer last night at his home in Brighton, Victoria.

A statement from Brad Jones Racing – the team that ‘JR’ spent the past three seasons with before being diagnosed with cancer – the team says that Richards’ choose team loyalty over personal gain.

“In the competitive world of V8 Supercars, Jason was a rare breed – a driver that could tread the fine line between rivalry and friendship,” the BJR statement said.

“He was never secretive, selfish or bad-tempered and had endless enthusiasm and energy for his job and team.

“The history books will not do him justice. Given the right equipment, ‘JR’ was easily a front-runner but chose team loyalty over personal gain, determined to work with his crew to reach the front of the grid together.

“Through the highs and lows of racing, JR’s uplifting presence and casual, self-effacing wit were unwavering and his effect he had on team morale is irreplaceable.

“He will forever be a member of the Jones family and this is a tragic day in the team’s history.