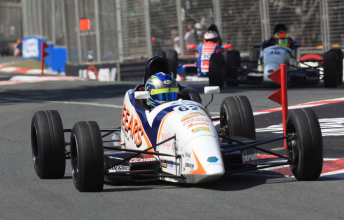 The team will enter 2012 with three brand-new Spectrum 014 chassis. Synergy is the first team to place an order for the new cars.

Currently under construction at Spectrum Racing Cars’ facility in Braeside, Victoria, the 014 is an evolution from the existing 012 chassis used since 2010, with key developments including a new aerodynamic package and a switch to the use of chrome moly steel tubing in the chassis space frame. Chrome moly is lighter and stronger than mild steel used on previous Spectrum chassis.

On the back of strong results in the second half of the 2011 season, Synergy Motorsport team principal Justin Cotter is excited about 2012 and the prospect of the new 014 taking to the track.

“We had a very encouraging finish to 2011 with Liam Sager posting his first win in Surfers Paradise and Mathew Hart winning the Rookie of the Year title,” he said.

“Both Liam and Mathew worked very well together in 2011 and are now ready to battle for regular race wins and the championship, while we look forward to having Sam join them in 2012.

“As long-time supporters of Spectrum products, we are delighted to be the first team to take delivery of the new 014 and have every reason to believe we can win our third Australian Formula Ford Championship title with the new car. After the successes of Paul Laskazeski in 2008 and Chaz Mostert in 2010, it seems we have a thing for winning the championship every two years, so look out in 2012.”