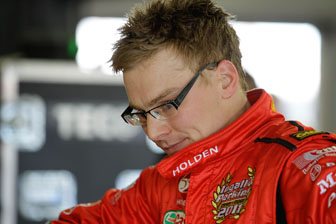 Like his famous father, Jack Perkins is the ‘Prince of the Privateers.’

Perkins finished second in this year’s Fujitsu V8 Supercars Series, securing him the V8 Supercars Privateer Award, which he accepted at the Gala Dinner recently.

But what does the Privateer Award mean to Perkins? And is the award and his efforts in 2011 enough to graduate to the ‘Main Game’?

Speedcafe.com’s Grant Rowley spoke with Perkins about the season and what he has in store for the future …

SPEEDCAFE: You’ve been in the Main Series before, but winning the Privateers’ Award is still an honourable achievement …

JACK PERKINS: It was fitting that we won the Privateers’ Award. Dad was always known as the ‘Prince of the Privateers’ as Mike Raymond would say. I really felt we were genuine privateers. We didn’t have any data from a Main Series team. It was just Mick, myself and a couple of good blokes just getting it done. It was quite rewarding to have won two races, four podiums and it was awesome to be a part of it. SPEEDCAFE: Talk a little about Sonic Motor Racing. The team is good, but how good are they?

PERKINS: They are the best team in Australian motorsport that doesn’t compete in the V8 Supercars Championship. The professionalism they show in every thing they do is outstanding – whether its Formula Ford, Carrera Cup or the Fujitsu Series.

They have finished second in the Fujitsu Series three years in a row. They really are a class outfit and like all good privateer efforts, they are a family run team.

We only had two guys working full-time on my car and Rod Jane’s, and the rest were dedicated weekend warriors. To take it up to the Main Series teams is almost unbelievable. Triple Eight has 15 laptops, FPR has about 500 engineers. We have one laptop, a good stop watch and a tyre gauge!

It’s very rewarding, and I can definitely see why my old man was so rapt when he cou;d beat the big players who had more moeny. 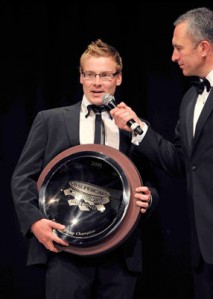 Jack Perkins accepts his Privateer's Award at the Gala Dinner

SPEEDCAFE: If Sonic competed in the Main Series, how would they go?

PERKINS: Well, I think he had the option to do that this year. The team would fit in quite well, in my opinion. Unfortuanetly, expanding costs money, and they’d need some massive things to happen, but I’m sure they do a better, if not as good a job as some of those who are already involved.

SPEEDCAFE: While you say that you’ve had no Main Series technical assistance, Roland Dane has assisted you in small ways too this year …

PERKINS: Roland’s support this season .. I can’t thank him enough. Without him, the Sonic deal wouldn’t have happened.

To be part of Triple Eight and KRE Engines finishing first and second in both championships, it is an incredible achievement by all of the people who work in both of those organisations.

SPEEDCAFE: Seats in the Main Series for 2012 are running thin. What is your take on next season?

PERKINS: I’m trying very hard to get back in the Championship, but it has to be in competitive equipment. There’s a couple of small, good options around, but I’m just hoping for the best case scenario.

There’s nothing that can be really talked about at this stage, but it’s obvious that I want to get back in.

SPEEDCAFE: There are a few late chances for next year, but an obvious one would be the second seat at Tekno Autosports alongside Jonathon Webb. Andrew Thompson has been heavily linked there. Are you a chance there?

PERKINS: It’s no secret that I want to be involved in the series with Triple Eight equipment. I’ve spent 18 months driving them, driving with Russell (Ingall) on the Gold Coast in 2010, drove the Triple Eight-built Sonic car all year, and then obviously with Russell again in the enduros this year.

I’d love to stay with that equipment because I feel as though I’m able to extract speed out of them, and it would be disappointing to let that time go to waste.

It’s pretty obvious that Webb’s is one place I’d like to go, but it’s not a simple decision. Everyone has got top make the right decision – whether it’s the drivers, team owners or the sponsors.

It’s not up to me, but I’d love to be in be in good equipment, in a good team as a team player. I’ll just keep doing the best job I can to make sure that happens. If it doesn’t happen for next year, then I’ll keep working to make it happen for the following years.