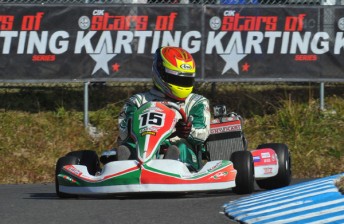 Brock Plumb will start as one of the favourites for the 2012 Pro Junior (KF3) crown. Pic: AF Images/Budd

The honour roll includes names such as IndyCar driver Ryan Briscoe, V8 drivers Michael Caruso, Andrew Thompson and Tim Slade – but who will add their name to the iconic list of Pro Junior (KF3) Champions in 2012.

During the past two years of the category in the Castrol EDGE CIK Stars of Karting Series Pierce Lehane has been the driver to beat, closely followed by Fujitsu Cool driver Joseph Mawson in 2011.  With the pair, along with Perth’s Jake Klarich, moving into the senior ranks for 2012, it opens the door for some other young talents to shine with new battle lines set to be drawn.

Throughout 2011, there were no less than five drivers who were never far off the pace and always pushing the likes of Mawson, Lehane and Klarich – Joseph Burton-Harris, Jake Coleman, Brock Plumb, Cameron Hill and Thomas Randle.

Plumb, who finished equal runner-up in the 2010 series and fifth in 2011, and Coleman, who finished fourth in the 2011 championship, will start as two of the strongest favourites for the 2012 series.

“I think I’ve got a real shot at the championship but it’s going to be very even with the likes of Brock, Joseph, Cam and Tommy all set to step it up a notch in 2012,” said Coleman.

“Everyone has really got a handle on the KF3 engine now and I think we’ve all learnt a lot from racing guys to the level of Pierce and Joey – especially how they prepare themselves for the events.”

Burton-Harris has been knocking on the door of victory for a while now, mixing it inside the top five throughout 2011 and he is excited about the 2012 season.

“It’s definitely going to competitive in 2012, both from the experienced guys and but also the drivers who have shown they are really talented in J’s. It will be a lot closer than what people think,” said Burton-Harris.

“I think Pierce and Joey had a bit of a mental edge over us, as we all knew how good they are, but it was more so physically.”

After also being right on the heels of the leading bunch for so long, Randle recently won his very first blue plate at the South Australian State Championships edging out Burton-Harris in the Junior Max class aboard his FA Kart.

Also moving up into the Pro Junior ranks is Lachlan McHugh and Callum Walker (who debuted in this year’s final round) while Anthony Martin’s younger brother Patrick is expected to make his debut in 2012.