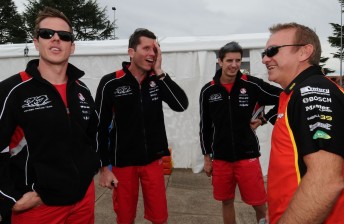 Russell Ingall has got his first taste of a Walkinshaw Racing Commodore at Phillip Island today.

The 2005 V8 Supercars champion, who has confirmed his switch to WR’s third car in 2012, sampled one of the factory Holdens at Phillip Island today during the team’s end of season ride day.

Today’s Phillip Island day is a ride event only, but Walkinshaw Racing’s operations manager Mike Henry says there are some small things that the team can get out of it for Ingall.

“Other than seating position, there’s no a lot you can get out of a ride day,” Henry told Speedcafe.com.

“You can’t make set-up changes, there’s no data, so in that regard, it’s not much of a day other than getting him to cut his first laps with us.

“We’ve made sure he had a good seat fit, and it will be good to get him in the organisation and working with the boys.”