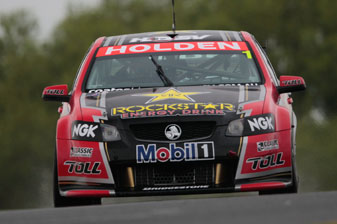 James Courtney says that the introduction of new Walkinshaw Racing managing director Steve Hallam will be a turning point for the factory Holden squad.

Hallam will take the top job at Walkinshaw Racing at the start of next month, overseeing both the Toll Holden Racing Team and the newly-branded Supercheap Auto Racing.

Hallam comes to Australia with a wealth of experience. He is currently the outgoing Executive Vice President of Competition for Michael Waltrip Racing in NASCAR, and prior to that was Head of Race Operations for McLaren Racing.

Courtney, who finished 10th in this year’s V8 Supercars Championship, told Speedcafe.com that Hallam’s presence will have a huge influence on the team.

“Steve Hallam is going to bring a massive injection of intelligence, history and credibility to the team,” Courtney said.

“I think he is going to have the biggest impact on our team for next year.” After a mid-season management shake-up where former CEO Craig Wilson was ousted, the position at the head of the company has been vacant.

“That has been one thing that we’ve been struggling with and we haven’t had a strong figurehead,” Courtney said.

“Steve will definitely grab that with both hands and run with it.

“I’m very excited going into next year;. The car has come on really well and Steve is going to take us to the next level.”

In other team news, Walkinshaw Racing is conducting its final ride day for the year at Phillip Island today.

Papis drove Tander’s Toll HRT Commodore (with Percat’s #222 on the windows) at Winton on Monday. CLICK HERE for Speedcafe.com’s story and video.