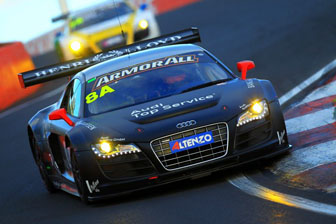 The winning Audis from last year's race will return in 2012

The 2012 Armor All Bathurst 12 Hour will have live coverage on SPEED Australia.

The final 90 minutes of the once-around-the-clock race will be broadcast live. The coverage of the race will immediately follow the completion of the live coverage of the Australian World Superbike round at Phillip Island, to be held on the same day.

It will mark the first time since the reintroduction of the Armor All Bathurst 12 Hour race in 2007 that any parts of the race will have been broadcast live.

SPEED will also show a three-hour post-produced package following the event, to air in primetime (7pm) on Saturday, March 24th.

Both the live and post-produced shows will be produced by the experienced Black Magic Media Productions with on-air talent and further details to be announced in due course.

“The Armor All Bathurst 12 Hour is fast becoming one of the premier endurance races on the motorsport calendar,” SPEED channel manager James Harrison said.

“It is an exciting development for SPEED to be involved in live coverage of the Event. February 26 is going to be a massive day of live motorsport on SPEED with the NASCAR Nationwide series race from Daytona, the World Superbike from Phillip Island – and the Armor All Bathurst 12 Hour is the perfect way to cap off the day.”

Event director James O’Brien said the announcement was a major bonus for the Armor All Bathurst 12 Hour for 2012.

“We have been targeting a live component on TV for some time and we are thrilled to be working with the SPEED Australia team next year,” Event Director James O’Brien said.

“In just one full year of broadcasting SPEED has established itself as the place for motorsports in Australia, so there is no better place than SPEED for the Armor All Bathurst 12 Hour to go live for the first time in the current era.

“This announcement takes the event to a new level with live coverage complimenting the post-produced show to give competitors excellent exposure.

“The fact SPEED will cross directly from their live coverage of the popular World Superbike championship round at Phillip Island to Mount Panorama for the closing stages of the Armor All Bathurst 12 Hour shows their commitment to the Event.

“SPEED’s live broadcast will showcase what we expect to be a dramatic conclusion to a race that is looking to have a strong field representing teams from Australia and around the world.”