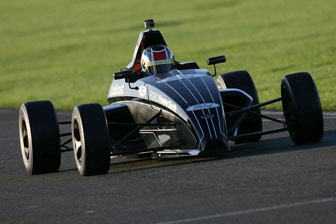 CAMS Rising Star Jack Le Brocq has enjoyed one of the first tastes of next year’s EcoBoost Formula Ford at the famous Silverstone, UK, circuit.

In the British Formula Ford’s annual Sample Day, the Australian driver drove the car as he aims to compete in next year’s UK-based championship.

The EcoBoost Formula Ford features an all new chassis and is powered by a four cylinder, 1600cc direct injection turbocharged engine putting out about 160bhp.

Having just secured a place in the coverted FIA Institute Young Driver Excellence Academy for 2012, the 19-year-old is keen to secure a ride in the UK next season, competing in the new car.

“The way the chassis and the tyres work together give it a lot of grip, and I like the sequential gearbox – it’s good experience for the categories a driver will come to further on in his career.

“I’m hoping to get my deal sorted out soon and then start to think about testing and learning the car and all the new circuits.”

Le Brocq finished as the runner up in the 2011 Australian Formula Ford Championship behind stand-out driver Cameron Waters.