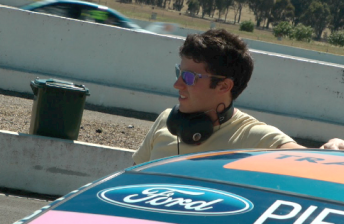 James Davison says that securing a berth in the IndyCar Series is still his highest priority.

After enjoying his first test in a V8 Supercar at Winton Raceway yesterday, Davison is working hard on sourcing a budget for the 2012 IndyCar Series.

Last month, Davison tested with Andretti Autosport at Palm Beach International Raceway, and while he says that V8 Supercars would be a great fall-back category, he is committed to finding a ride in the United States-based series.

“That’s what I’ve been working my whole career,” said Davison, who finished second in the 2009 Indy Lights Series.

“I left Australia when I was 18, and I’ve gone through the whole road to Indy. The Andretti test was something that I’d worked hard for and had a really good day.

“It’s just a question of catching a break.”

“James had a good record in Indy Lights, and the IndyCar test showed that he can take what he learned and move up to the next level,” Andretti said.

“He gave a lot of good feedback to the engineers – something that’s really important when you’re working in a team setting like this. He worked hard to understand everything about the car and equipment.”

See below for Speedcafe.com’s exclusive video from Winton Raceway.