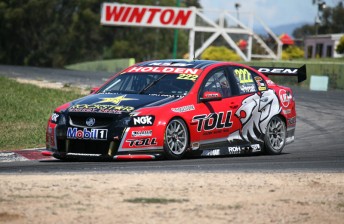 Max Papis aboard the HRT Commodore

The 42-year-old was assisted at the test by the HRT’s 2011 endurance co-drivers Percat and Cameron McConville.

Papis visited this year’s Supercheap Auto Bathurst 1000 as a guest of HRT regular James Courtney, but has suggested that racing a V8 Supercar at Bathurst next year may be too big a step.

“I told James that it would be an honour and a pleasure to be able to share a car with him one day,” Papis told Speedcafe.com.

“Maybe not at Bathurst – that’s a pretty tough race track and Cam and Nick have been doing such a good job, but I feel that Surfers Paradise could be a good opportunity to start and see how the Italian accent and the Australian accent mix up together.”

Papis did however re-iterate his desire to compete in the Armor All Bathurst 12 Hour, which will take place next February.

If Papis does line-up with the HRT at next year’s Gold Coast race, it may cause unrest within the paddock, as the race regulations state that international co-drivers should test only on the official day in the week leading into the race.

Papis will again sample HRT machinary this Wednesday, when he lines up for the factory team’s five-car ride day at Phillip Island.

See below for more with Max Papis in Speedcafe.com’s exclusive video below