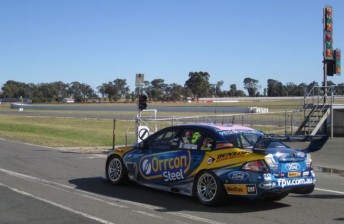 The Orrcon Falon was first on track this morning

Three V8 Supercars Championship teams are testing at Winton Motor Raceway today – and all three are using the end of season test for different reasons.

FPR has brought three cars – the Orrcon Steel Falcon, the Trading Post Falcon and the team’s Development Series entry that Chaz Mostert drove in the final two rounds of the 2011 season. The Bottle-O Racing Falcon is still at the team’s workshop being repaired after its crash at the Sydney Telstra 500 last week.

The Mostert car is being driven today with #55 on the windows (signifying the use of the #55’s allocated tyre bank).

With Mark Winterbottom holidaying with family in the United States, the team’s endurance co-driver Steven Richards is conducting the bulk of the testing in the #5 car.

Will Davison and Mostert are completing laps in their #6 and #55 cars respectively, while James Davison, new FPR endurance driver signing John McIntyre and Development Series racer Tim Blanchard are also testing with the team today.

At Walkinshaw Racing, the team has rolled out the car that Garth Tander campaigned this season, using the #222’s tyre bank.

At Garry Rogers Motorsport, the team is testing two cars, with Michael Caruso testing a number of 2012 developmental parts in his regular car ahead of the new season.

The second GRM entry is one of the team’s spare chassis. GRM deemed that Lee Holdsworth’s #33 Commodore was too badly damaged to test after his in the late-race accident with Paul Dumbrell at the Sydney Telstra 500.