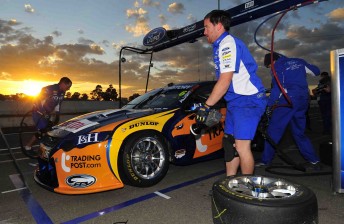 Davison, the younger cousin of V8 drivers and Alex and Will, is set to drive a Ford Performance Racing Falcon FG.

It is expected that Davison will sample the #6 Trading Post Ford, regularly driven by his cousin Will Davison, while Papis – a former Champ Car race winner – will drive Nick Percat’s Coates Hire Walkinshaw Racing Commodore VE.

Davison, who missed out on a planned test with Lucas Dumbrell Motorsport last year, says he is looking forward to his first test in a V8 Supercar.

“I am grateful to Tim (Edwards) for the opportunity to have my first V8 experience with FPR,” Davison told Speedcafe.com.

“It will be a unique experience in itself as well as learning and working with my cousin Will.”

Davison has recently returned to Australia after experiencing his first test in an IndyCar – driving an Andretti Autosports Dallara at Palm Beach International Raceway.

While he will focus his energies on drive a V8 Supercar today, he says that a future in IndyCar is not out of the question.

“I have met with Michael (Andretti) twice since the test and I’m definitely am in good shape for a seat there if some sponsorship can be secured by either party,” he said.

“It’s no secret times are very tough in IndyCar with Newman Haas recently shutting down (as an example).”

Other cars, teams and drivers expected at Winton today include Garry Rogers Motorsport, who will test four drivers before it selects a replacement for Lee Holdsworth. As previously reported by Speedcafe.com, GRM will sample the talents of Scott McLaughlin, Cameron Waters, Paul Laskaszeki and Tim Macrow.