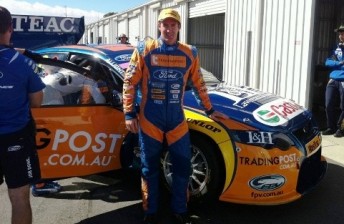 Ford Performance Racing has confirmed that Kiwi John McIntyre will partner Will Davison in next year’s V8 Supercars endurance races.

The experienced Kiwi has been a regular in the endurance races, driving with Stone Brothers Racing in all but one of the long distance events since 2007.

McIntyre, an administrator and driver in the all-new V8 SuperTourers class, says that he is delighted to be a part of the factory Ford team.

“First up, FPR is the Ford factory team and as a Ford-supported driver it is a real honour to be driving with them,” McIntyre said.

“As a professional V8 Supercar co-driver I only enter two races a year in Australia so my goal has to be to win the endurance events and in particular, Bathurst. To head there in the #6 Tradingpost FPR Falcon with Will Davison gives me my greatest shot yet at a Bathurst win.

“It is also a relief to know where I am driving well before the New Year. Last year I had six or seven months out of the car and that makes it hard. I can now meet the team and test the car before the year is out which puts us on the front foot and gives us a jump on everyone else.”

McIntyre has two V8 Supercars podiums to his name. Alongside SP Tools driver Shane van Gisbergen this year, he finished fifth at the L&H 500 at Phillip Island and sixth at the Supercheap Auto Bathurst 1000.

McIntyre gets his first taste of FPR machinery today at the team’s final test day of the year at Winton. CLICK HERE for more on V8 testing at Winton today.

“After analysing John’s performances against his team-mate this year and against the other co-drivers it was clear that he was one of the stand out performers,” Edwards said.

“It is a real boost to our team to secure someone of his experience so far in advance of next season as it will allow us extra time to integrate John into our team and get him familiar with Will and our car.

“That process starts today with our test so we are already well underway with our preparations for next year.

“By winning the last race of the year and with our endurance race line-up already locked away we head into the off-season break in the ideal position.”

Mark Winterbottom will again be partnered by Steve Richards in 2012 in the #5 Orrcon Steel FPR Falcon as Richards is entering the second season of his two-year endurance race deal with the team.