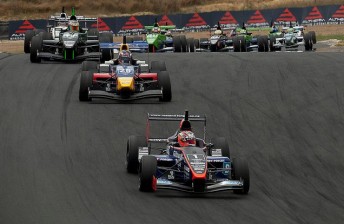 A total of fifteen international drivers are expected to line-up for the 2012 Toyota Racing Series in New Zealand.

The eighth season of the single-seater class will kick-off in mid-January, with five rounds to be run on consecutive weekends.

The international contingent will be headlined by 20-year-old Briton Josh Hill, with the son of 1996 World Drivers’ Champion Damon Hill returning for a second TRS season

Other visitors include 16-year-old Ferrari Academy driver Raffaele Marciello, who has raced in the Formula Abarth and Italian Formula 3 Championships since graduating from karts.

Fellow Italian Michela Cerruti will also be on the grid, with the 24-year-old using the TRS to make the switch from touring car to open wheel competition.

Local honour will be held up by Mitch Evans, Nick Cassidy, Chris Vlok, Jono Lester and Damon Leitch, while Jordan Oon is the only entrant from Australia.

The series begins at Teretonga on the January 14-15 weekend, before visiting Timaru, Taupo, Hampton Downs and Manfield, with the final round doubling as the 57th New Zealand Grand Prix.

See below for the TRS entry list as of December 12