Whincup: NASCAR my only overseas temptation

Whincup: NASCAR my only overseas temptation 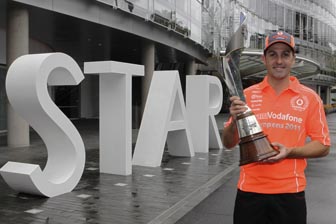 Three-time and reigning V8 Supercars Champion Jamie Whincup says that NASCAR is the only international category that could tempt him away from the Australian motor racing scene.

Speaking to American-based radio show Tech House and Speed, Whincup pinpointed NASCAR as the one discipline of racing that could be in his future.

“I’ve put all my effort into the V8 Supercars Championship and I’m really enjoying my time over here, but maybe one day I’ll need a new motivation,” Whincup said.

“If I’m going to go anywhere, it will certainly be over to the US and I’ll have a look at the NASCAR scene.”

Before Whincup starts thinking too seriously about America, Whincup says he is looking forward to a break after the tight season finale in Sydney.

“At the moment, I’m looking forward to my break. It has been a long hard year,” he said.

“I was worried that my team-mate was going to do a Tony Stewart on me and beat me at the last round. Thankfully, that didn’t happen and we got across the line.”

Whincup also spoke to Woods about the Sydney street race, the pressure of winning the title and what he will be doing over the christmas break.

CLICK HERE for more with Whincup and his interview with Tech House and Speed’s Bill Wood.