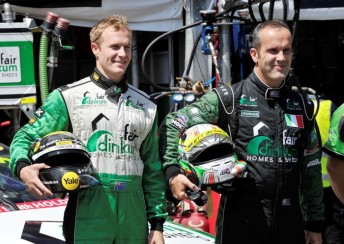 Giovanardi (right) with Karl Reindler at the ArmorAll Gold Coast 600

Fabrizio Giovanardi is a Touring Car modern day great. The Italian has won a host or championships, including a Spanish Touring car title, back to back Italian Superturismo and European Super Touring series wins, one European and two British Touring car titles and this year was the European Touring Car Cup champion. Not bad for a driver that didn’t contemplate a career in motor sport until he was 18.

Giovanardi started racing when he was 16. At this stage he was more interested in motorbikes than four wheels, but managed to find an interest and a talent that would lead to karting success.

“Honestly, I was playing with the karts with a friend, I wasn’t focussing on being a driver,” Fabrizio Giovanardi explained to Speedcafe.com.

“I started at 16 and two years later I was world champion in karting so at that moment I understood that I could do something with motor sport as a career.

“I had nothing to lose and tried hard. I then raced Formula 3 and I started my career.”

After karting Giovanardi raced in Formula 3 and then F3000. He drove strongly winning several races in F3, before winning his first ever race in F3000. 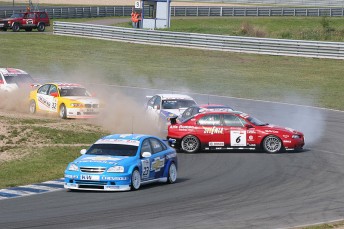 Giovanardi having a spin in a World Touring car race

“Unfortunately I was in the wrong team,” said Giovanardi.

“I had a good start because my first race in F3000 I won, but later on the team focussed on the older drivers.

“After two years I saw there would be no space for me in the team.

“After this I started to practice with Peugeot in touring cars and thought that this (category) is for me.”

With a lot of his then F3 and F3000 contemporaries progressing to Formula One, Giovanardi is not disappointed that he was not offered a drive.

“There were only 25 or 26 cars running, there was no room,” said Giovanardi.

“I can be happy anyway because I had a chance to try it, but looking back I was happy to swap into touring cars.

“Yes there were teams that showed interest, but there was no room.

“I’m still racing and those other guys are not. I think I am the winner.”

For the last 15 years Giovanardi has almost exclusively focussed on Touring Cars. He spent nine years in the Italian Superturismo series, winning it twice in 1998 and 1999, he was racing in and won a Spanish title, then progressed to the European, World and British Touring Car Championships (amongst others) winning titles in 2000, 2001, 2002, 2007 and 2008.

Giovanardi has always had a steely approach to racing, enjoying the challenge of developing a car and fighting for victory as opposed to winning easily in a superior car. 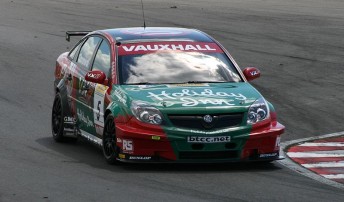 “I like to fight until the last race and win with effort rather than winning too easily in the fast car,” said Giovanardi.

“It is boring if you are in the best, fastest car. Making it work to win makes you appreciate what you are doing so much more.”

Giovanardi got his first chance to drive a V8 Supercar in 2008. He’d just won back to back BTCC titles racing for Triple Eight and got the call to travel to Australia.

“I was driving for Triple Eight in England,” said Giovanardi.

“The boss was a good friend with Roland (Dane) and he wanted an international driver, so they sent me to Australia to race with TeamVodafone (where he came 17th and 15th with Marc Hynes in the 88 car).

“I struggled initially because a V8 is so different, but I can tell you that I enjoyed it because it is a challenging car. I really liked to fight with it.

“After that I had two chances more to race and I always say yes.”

After racing for TeamVodafone, Giovanardi didn’t race in Australia again until 2010, the year V8 Supercars changed the format of the ArmorAll Gold Coast 600 to include internationally based drivers. 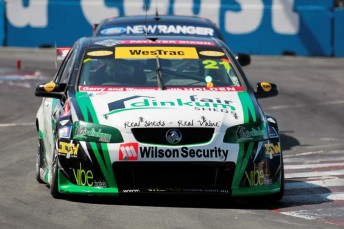 Having enjoyed V8s in 2008, Giovanardi was thrilled to come out and race again. After teaming up in the Fair Dinkum Homes and Sheds car the last two years, the Italian admitted that he would like to race V8s full time if the opportunity presented.

“I would like to return to Australia and run in the championship,” said Giovanardi.

“It’s a nice idea for me but I see that the teams don’t believe the drivers in Europe could do well.

“(laughing) I hope someone could find room for me, I’d like to stay here and race but I know that it is not that easy.”

Giovanardi’s career highlight is hard to pin point, but he has fond memories of the final race in the 2002 European Touring Car Championship – a series he won.

“The memories of the 2002 European Touring Car Championship are very good. I won the last race to win the title. I was under pressure, but I love the pressure.”

Looking towards 2012 there could be an opportunity to run in the Superstars Series, but it’s not something that is being seriously considered by Giovanardi at the moment.

“(The Superstars Series) looks like a bad copy of the V8 championship,” said Giovanardi.

“It’s been developed by private teams who want to run big cars but it’s hard to do this in Europe, they don’t have the mindset.

“In Europe it’s all about 1.5-litre and 2-litre racing, it’s about the marketing, they don’t understand big cars and the noise.

“The guys in charge of Superstars try to push a nice car, a big car and a noisy car.

“There is a big wall to jump over. There is World Touring Cars and other categories, too many in Europe.

“It could be interesting but it’s not at the moment.”

With 2011 drawing to a close, Giovanardi is looking at his options for next year.

“I did this year’s VLN race (the Nürburgring 24-Hour) and at the moment my programme is to develop the car for next year’s Nürburgring 24-hour race,” said Giovanardi.

“I’m speaking to two teams about the World Touring Cars. There’s nothing in place at the moment so we’ll see how it goes. This time of year is always difficult as you try and put everything together.”

Fabrizio Giovanardi being interviews after a BTTC race in 2008

Giovanardi on the track