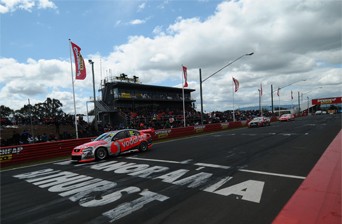 Car #88 led the majority of the laps at Bathurst this year, but was not there when it counted

Jamie Whincup says that taking the chequered flag to win the Supercheap Auto Bathurst 1000 stands out as a significant box he’s yet to tick in his V8 Supercars career.

Whincup won The Great Race three times in a row between 2006 and 2008, but sat in the garage during the final stint on each occasion watching Craig Lowndes finish the job.

While Whincup was given the task of bringing the #888 Whincup/Lowndes entry home in 2009, clutch issues put paid to his chances of victory.

Whincup has also finished the race during the two years where drivers have been required to stay in their own cars for the enduros, netting second place behind Lowndes in 2010, and  21st this year following electrical issues.

Although the Gold Coast based driver says he will not give his motivations for next year serious thought until after Christmas, winning Bathurst as the lead driver is high on the 28-year-old’s agenda.

“I’m lucky enough to have three Bathurst wins and three trophies at home, all with Craig,” Whincup told Speedcafe.com.

“They were unbelievably good wins and I felt that I was part of all of them, but I’ve never crossed the line to win The Great Race, so I’d love to be able to do that one day.

“Bathurst this year was very disappointing – I really focussed on that event from the start of the year.

“I really felt like we prepared well, and I feel like we were in the box seat with 35 laps to go when a $2 part let us down.”

Whincup’s contract with TeamVodafone expires at the conclusion of next season, leading to widespread speculation of a possible international future for his driving career.

While the timing of Whincup’s deal could also see him free to find a fresh challenge with a new manufacturer under V8 Supercars’ Car of the Future regulations that will be introduced in 2013, Whincup says he is not thinking about long-term plans just yet.

“It’s all about now for me,” said Whincup when asked of his future.

“I put all my eggs in one basket trying to win the V8 Supercar Championship, and we’ve achieved that again this year. What the future holds (I don’t know).

“I’m still contracted to TeamVodafone for 2012 so I’m focussed on that at this stage.”