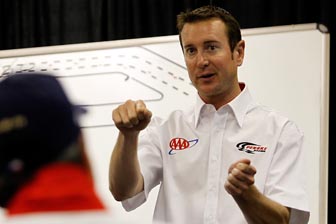 NASCAR Sprint Cup squad Penske Racing has confirmed that it has parted ways with Kurt Busch following an off-track incident at the season-ending race at Homestead-Miami Speedway.

Team owner Roger Penske thanked Busch for his time with the team in a statement that described the break-up as a ‘mutual agreement’.

“I appreciate the victories that Kurt has brought Penske Racing and our sponsors over the past six years,” said Penske read the statement.

“While I am disappointed that Kurt will not be racing for our team in the future, both Kurt and I felt that separating at this time was best for all parties, including our team and sponsors. I wish Kurt the best in his future racing endeavours.”

Busch has also issued his own statement, in which the 33-year-old acknowledged his attitude towards racing had become a major issue.

“I recognise the passion and emotion that have helped me succeed on the track need to be better channelled off the track,” read Busch’s statement in part.

“The past few months I began working with a sports psychologist to help me better deal with my emotions, especially following moments of frustration during competition.

“I never want to take for granted that it’s a privilege to earn a living as a NASCAR driver.”

Penske Racing president Tim Cindric has also commented on the matter, telling SceneDaily that a series of incidents led to Busch’s removal.

“A lot of things that we’ve gone through (since Homestead-Miami) weren’t new discussions,” said Cindric.

“Roger is the last one that wants to admit failure. It’s difficult to know that what you set out to do, you didn’t do in terms of finishing out Kurt’s career in a good way and have something that ends on a good note.

“Roger is as loyal as they come, in my opinion. He’s someone that is certainly there to try and help. It just got to the point where we didn’t feel like we were really helping him progress and obviously he didn’t feel we were progressing at the right rate. So it was time to move on.”

David Ragan, Brian Vickers and David Reutimann are all being linked to the now empty #22 Dodge ride, with a one-year deal for Roush Fenway refugee Ragan appearing the most likely outcome at this stage. Busch’s future remains unclear.