Outlaws Champ heads back to Sydney

Outlaws Champ heads back to Sydney 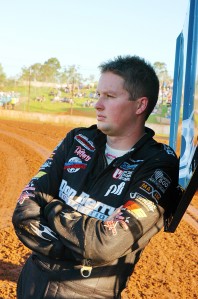 Meyers, who this year retained his World of Outlaws national title, will contest the time-honoured Valvoline Australian Sprintcar Grand Prix on Boxing Night.

Meyers has signed for five race appearances at Tyrepower Sydney Speedway during the 2011/12 season.

He will compete in the January 1 Coca-Cola Sprintcar Stampede, the Sprintcar Internationale (January 7) and the Scott Darley Challenge (January 13 and 14).

As an indication of how seriously Meyers, from California, is treating this latest Down Under campaign, he will use cars freighted to Australia from his own Elite Racing team workshop.

He has shipped enough equipment and spare parts inventory to field four Sprintcars!

32-year-old Meyers, who has over 50 career World of Outlaws main event wins to his credit, scored nine feature race victories on the way to the successful retention of his WoO crown.

A winning streak of five main events toward the end of the 2011 World of Outlaws season clinched the championship.
Meyers is only the fifth driver in World of Outlaws history to record back-to-back Titles.