Australian touring car legend Allan Moffat has been inducted as a life member of the Australian Racing Drivers’ Club.

At the club’s Annual General Meeting, Moffat was given the club’s highest honour, joining legends such as Sir Jack Brabham and Leo Geoghegan.

Moffat is also a member of the ARDC board.

ARDC CEO Glenn Matthews said it was a simple decision to induct Allan as a life member, given his iconic status in the Australian motorsport community.

“Allan Moffat has given over 30 years of his life to our club, and changed motor racing in Australia,” said Matthews.

“Coming into our 60th year in 2012, the ARDC is taking steps to recognise the people who have shaped the face of not only our club, but also Australian motorsport in general. 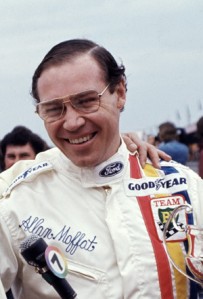 “Allan Moffat has lived and breathed motorsport for 50 years. He is one of the sport’s icons, and the ARDC is proud to have him on the board, helping to steer our club into the future.

“Allan is an Australian sporting great, and one extremely deserving of this honour. We hope that he sees fit to remain on the board of the ARDC for a long time to come.”

Other honours that Moffat has received include recognition from the Queen (OBE), and has been inducted into V8 Supercars Hall of Fame.