Pepsi decides on livery changes for 2012

Pepsi decides on livery changes for 2012 Pepsi will continue with its graffiti-inspired race car designs in 2012.

After announcing a one-year extension on its sponsorship of Greg Murphy’s Kelly Racing Commodore VE at last weekend’s Sydney Telstra 500, PepsiCo has decided to stick with the rotating colour schemes for next season.

For the final V8 event of the year, Murphy competed in his fifth different livery for the year.

PepsiCo’s Marketing Manager Danielle Maher says that it was thrilled with the graffiti looks and the associated marketing and consumer results that it achieved over the course of its inaugural year in V8 Supercars.

“We’re going to keep the same theme for next year. The graffiti has worked really well for us,” Maher told Speedcafe.com.

“The fans love it – they are very passionate about the different designs. It’s a bit polarising, but we actually like that, it’s a bit disruptive. 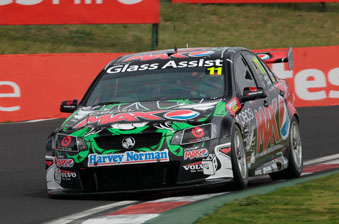 “So next year, we’ll continue with graffiti. As marketers, we are tempted to try something new and different, but all of our research says that the fans love it.”

Maher said that the company will place a greater focus on telling the story behind the designs next year.

“They will come out at unexpected times throughout the year again, and we’ll continue to have different graffiti designs, but the insight that we found was people want to know what the story is behind the designs,” she said.

“We didn’t really do that this year. We just went out with a range of designs, whereas next year, each design will have a story behind it. We don’t know what they are yet, though. We’ll have to wait and see.”

The 2011 season was PepsiCo’s first major foray into V8 Supercars. Besides its sponsorship of Murphy’s car, it also ran the ‘Skin it to win’ and ‘Cash or Car’ promotions.