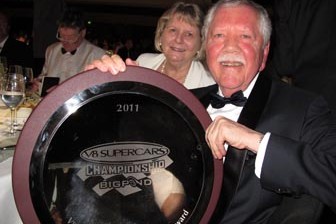 Berghouse, now semi-retired, specialised in marketing, advertising and publishing – mostly in the motorsports and aviation worlds. For many, though, his is best known for his skills behind his camera.

After starting his professional career at Sydney-based magazine house Casey Murray, before creating his own business in 1978. He then co-founded the Chevron Publishing Group.

Chevron, now owned by Next Media, is responsible for publishing over 70 motor racing-based books and thousands of racing-related magazine.

“I am surprised and very surprised to have taken the award,” Berghouse told Speedcafe.com.

“I’ve been in the industry for more than 50 years, and it’s nice to be recognised by my peers.

“2009 was my 50th Bathurst race. I’ve long forgotten all the places I’ve been to and the places and I’ve seen, but I think I saw the best part of my career was witnessing the transition between amateur and professional motor racing.”

Berghouse is now semi-retired and is the chairman of the Chevron Group.