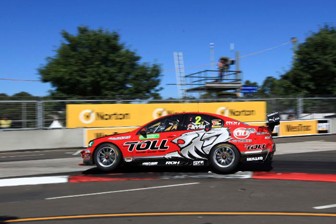 Tander remained fifth in points despite his penalty

Garth Tander and Todd Kelly have both been handed post-race points penalties following incidents in the 28th and final race of the 2011 V8 Supercars Championship.

Tander was the last classified finisher in Sunday’s leg of the Sydney Telstra 500 after losing 11 laps while fixing damage incurred in an incident with Kelly.

Tander was handed a 25-point penalty for the clash, which saw the Toll Holden Racing Team Commodore make contact with the back of the Jack Daniel’s Racing entry at Turns 9, 10 and 11 – eventually resulting in Kelly spinning into the tyre barrier.

Kelly meanwhile has been docked 25 points for an earlier incident with Jason Bright, in which the Team BOC Commodore was tipped into a spin.

Kelly finish the race eight laps down in 16th, while Bright remained on course for a top five finish before late contact with Jonathon Webb dropped him to ninth.

The collision with Webb was not investigated by the stewards – a situation that has frustrated Bright.

“I can’t believe the officials didn’t have more of a look at it, which leaves me with no faith in our judicial system once again,” said Bright after the race.

“I’ve copped two drive-through penalties during races this year but they didn’t even look into this incident after the race – they just wiped it.”

The penalties have not affected the final championship standings, with Tander remaining fifth and Kelly 18th.

In addition, James Moffat has been fined $5,000 for barging his way into the fastlane immediately after the start of Race 28, where half the field had elected to stop for slick tyres.