Four drivers to get GRM audition at Winton

Four drivers to get GRM audition at Winton Garry Rogers Motorsport will audition four drivers before the team decides on its replacement for Lee Holdsworth.

The test could go some way to deciding who will drive the #33 entry in next year’s championship.

“Shirl (Kevin Shawyer) and I have put a list together. We’ve got Laskaszeki, Waters, Macrow and McLaughlin (to drive at Winton),” Rogers told Speedcafe.com.

Of the four drivers, McLaughlin is the most experienced, despite being one of the youngest. 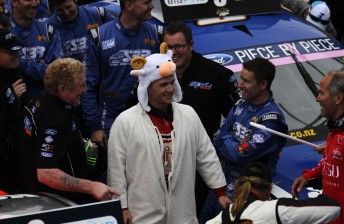 Holdsworth was delivered to his new team SBR in a cow suit!

Rogers confirmed that both McLaughlin and Waters are testing due to their connection with Fujitsu.

The 17-year-old also made one development series start at Sandown two weeks ago with Kelly Racing.

Likewise for Laskaszeki. The Australian karting and Formula Ford champion has been on the sidelines for a few years but is regarded as a naturally gifted race driver.

Rogers says that all of these drivers, plus more, are in with a chance to drive, but maintains he is in no rush to make a decision.

“We’re only halfway through December, we’re not on until March, I want to get it out of the way, but there’s no hurry.”