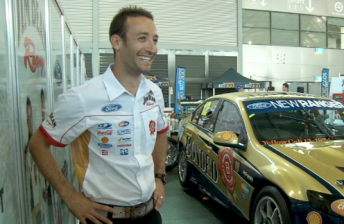 Dean Fiore will continue to race under the number 12 at Dick Johnson Racing next year.

Fiore will combine with DJR next year in a joint venture, competing with his Triple F Racing Entitlements Contract in the expanded three car line-up.

The West Australian will race the #12 Jim Beam Falcon, alongside the other Jim Beam car of Steve Johnson.

The #18 will continue to be raced by James Moffat, who is expected to race in an all-Norton 360-branded Falcon FG.

Confirmation of that deal is expected some time in the new year.

It will be the first time that Dick Johnson Racing’s two Jim Beam Racing entries have not used the team’s famous #17 and #18.

Fiore says that keeping the #12 is a way to honour his family team’s continued involvement in the sport.

“My brothers and my old man are a big part of that so we’ll definitely keep #12 on board and run that into next year.”

Fiore will also continue to race his current Triple Eight-built Falcon FG. The car will head to DJR’s Queensland factory for a complete rebuild before the 2012 season.

To co-incide with the new deal, DJR and Jim Beam also announced a one-year extension to its sponsorship agreement, extending the partnership to six seasons. CLICK HERE for the full story.

For more with Dean Fiore, see Speedcafe.com’s video below.