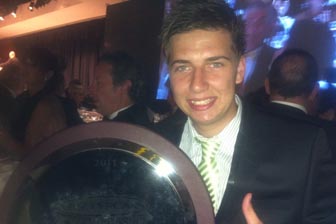 The multiple Australian karting champion and 2010 Australian Formula Ford champ made the step up to V8 Supercars this year, driving for Miles Racing in the first five rounds. He switched to Ford Performance Racing in the final two rounds, finishing on the podium at Sandown.

“Everything went the way we wanted. The main goal was to try and win races, and with FPR, it gave me some competitive speed. it’s brilliant to pull it off.”