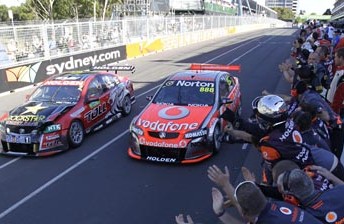 Having finished second in the V8 Supercars Championship yesterday, Lowndes accepted the medal at this evening’s Gala Dinner at the Sydney Convention Centre, Darling Harbour.

Lowndes took the prestigious medal named after the late great Sheene for his all-round appeal with fans and the media, personality, leadership and his contribution to the sport. He also won the medal in 2005 and 2006.

In the other awards, Whincup accepted his award as 2011 Champion, his third title in four years.

The 28-year-old TeamVodafone ace also picked up his Championship ring (awarded for the first time this year) as well as the traditional Australian Touring Car Championship from CAMS, while a range of other awards were handed out on the evening. 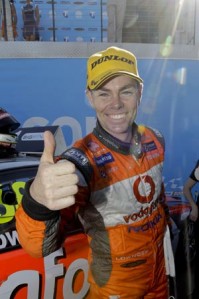 The inaugural V8 Supercar Champion Glenn Seton (1997 Champion) was inducted into the Hall of Fame for his contribution in the sport over many years.

Long-time co-owners of V8 Supercars James Erskine and Basil Scaffidi received Appreciation of Service Awards, as did former Board member and Chairman of the Clipsal 500 in Adelaide Roger Cook.

The Clipsal 500, after a term of not being able to be awarded the Event of the Year, deservedly took the gong again for this year’s event.

For coverage from the V8 Supercars Gala Awards Dinner, tune into V8Xtra on Channel 7 this Saturday December 10 at 12.00pm AEDT.