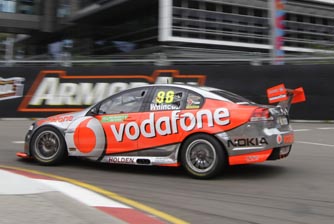 Jamie Whincup is the 2011 V8 Supercars Champion after salvaging an eighth place finish from a difficult final race at the Sydney Telstra 500.

There was heartbreak for Paul Dumbrell in the closing stages, as The Bottle-O Racing driver spun out of second place with just five laps to go in his last event as a full-time driver.

The incident also claimed Lee Holdsworth, who was running third in his last drive with Fujitsu Racing before striking the stationary Falcon at the blind Turn 11. Jamie Whincup with his championship trophy

With Will Davison also in the wall having understeered off at Turn 8 while attempting to take third from van Gisbergen, the Safety Car was called – setting up a two-lap sprint to the finish that proved to do little to change the finishing order.

The race started in bizarre circumstances with half the field electing to pit on the warm-up lap for slick tyres.

Davison, Whincup and Lowndes were among those to take the start from the grid on wets, but were in pitlane before a dozen laps had been run as the intermittent showers eventually proved too few and far between for the grooved rubber.

The stops saw Tony D’Alberto, Winterbottom and Holdsworth assume the top positions – with the Orrcon Falcon taking the lead before a Lap 25 Safety Car for a stricken Warren Luff saw the entire field come to pitlane.

With the strategies reset, Lowndes and Whincup were mired down in 10th and 18th respectively – setting up a difficult afternoon for the TeamVodafone duo.

The leading contenders elected not to pit under a second Safety Car – this time for a crash from Tony D’Alberto on Lap 33, but returned to the lane 14 laps later when the full-course yellow again flew for pieces of Garth Tander’s exhaust that had been left on the circuit.

Lowndes and Whincup had risen to seventh and ninth respectively in the middle phase of the race, but fell to eighth and 18th in the final stops as the #88 car was forced to wait in line for its tyres and fuel.

The pair again made their way through the pack after the restart, as Winterbottom continued to measure the gap to Dumbrell at the front.

Like Dumbrell, Holdsworth and Davison, Bright saw a strong result slip away in the closing stages, with the Team BOC Commodore being turned around by Webb while running seventh on Lap 59.

The fracas saw Whincup gain the extra place he needed to move into the top 12 – a position from which he could not lose the title no matter where Lowndes finished.

The Race 28 results see Winterbottom hold onto third in the championship standings ahead of van Gisbergen and Tander.

Rick Kelly moves passed Will Davison for sixth, while Holdsworth, Slade and Courtney round out the top 10, with the Toll HRT pilot bumping Alex Davison to 11th.

See below for the full Race 27 result

See below for the championship standings after 28 of 28 races