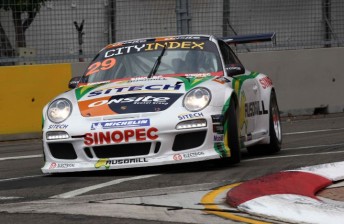 Michael Patrizi has ended the 2011 City Index Porsche Carrera Cup season with a win after pace-setter Ben Barker crashed on the penultimate lap of Race 3.

Barker, the winner of Races 1 and 2 earlier in the Sydney Telstra 500 weekend, led the final from pole position until contact with the Turn 5 exit wall on Lap 11 of 12 resulted in a DNF.

Patrizi, who ran just fifth on the opening lap, passed the limping BRM entry to score the victory from team-mate and overall round winner Jonny Reid.

The wet conditions contributed to a high attrition rate, with Daniel Gaunt and 2011 champion Craig Baird both joining Barker on the retirements list.

Starting from a lowly 12th after contact with Baird in Race 2, Gaunt’s race was run on the opening lap, while Baird lasted seven more before a failure sent him into the wall.

The final results left Reid to share the podium with Patrizi and Barker.

Baird had earlier wrapped up the 2011 title in Race 2. CLICK HERE for more.

The 2012 City Index Porsche Carrera Cup will get underway at the Clipsal 500 next March.