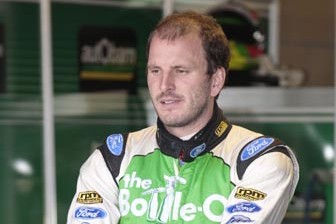 A momentary lapse of concentration has cost Paul Dumbrell a certain podium in his final event as as full-time V8 Supercars driver.

Running in second place with five laps remaining, The Bottle-O Racing driver looped his Falcon at Turn 11 before being collected heavily by Fujitsu Racing’s Lee Holdsworth.

The incident eliminated both drivers from the Sydney Telstra 500.

The 28-year-old says that he lost focus at the braking point when passing the lapped Dean Fiore.

“I wanted to win, but I didn’t crash because I was pushing – I just lost concentration when I was passing the slower car,” Dumbrell told Speedcafe.com.

“It was a momentary lapse of concentration and that was the end of it. I just locked the rears momentarily and spun.

“Besides ruining my race, it also ruined Lee Holdsworth’s last race with his team. It would have been a fitting tribute for both of us to be on the podium. I’m sorry to him for that.”

Dumbrell says that the crash and non-result hit him hard, putting a sour note on the end of a long racing career.

“The disappointment of the crash is probably worse than the fact that that was my last race,” he said.

“It’s a big realisation. This is something I’ve done nine years full time, and 18 years since I started, and it’s over. There’s no two ways about it. I’ve made my decision. I wasn’t pushed and I’ll live and die by the sword.”

So, what now for Paul Dumbrell? According to the man himself, it’s business as usual …

“It’s just back into work for me. I have a meeting at Autobarn Bankstown at 10am tomorrow,” he said.

“In the next few months, nothing will change, up until the first round next year, everything will be the same. When I’m at home, watching it on TV, and a few good mates racing, that’s going to be the big realisation of my decision.”

While Dumbrell has retired from full-time competition, he will compete in next year’s V8 Supercars endurance races. He is expected to team up with Jamie Whincup in the #1 TeamVodafone Commodore VE.