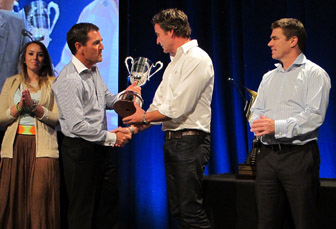 Baird, who wrapped up his third Carrera Cup title in the second race at this weekend’s Sydney Telstra 500, paid tribute to his cancer stricken countryman at Carrera Cup’s end of season dinner at Allphones Arena at Sydney Olympic Park.

Richards was given the opportunity to drive the guest Carrera Cup car at Townsville, but was unable to compete due to his illness.

After a three-year hiatus, the return of Carrera Cup in 2011 was a popular one, and Baird was pleased to take his third crown.

“It was a great season and obviously a great result,” Baird said at the award ceremony.

“For Carrera Cup to come back to Australia was mega. There was such a big hole on the industry which has been filled now.”

The top three in each class have received an all expenses paid business class trip to Finland to try their hand at Ice Force – a Porsche Sport Driving School course on the frozen lakes of Finland.

In other awards for the night, Ben Barker won the Michelin Australia Sportsperson of the Year Award, which awards him $25,000 worth of Michelin tyres in the coming Carrera Cup season.

Also, Jonny Reid won the TUDOR Fastest Lap Award, which seen him take home a TUDOR watch valued at around $6,000. Also, Reid’s team manager Andy McElrea was awarded the use of a Porsche Cayenne for the next 12 months after McElrea Racing won the Team’s Championship.

The Porsche City Index Carrera Cup Championship expands to eight rounds in 2012, which will kick off at the Clipsal 500.