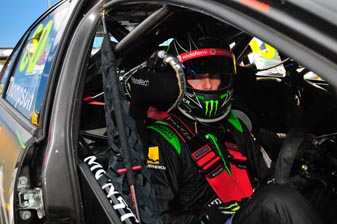 Andrew Thompson has secured the 2011 Fujitsu V8 Supercars Series crown by winning the first of two races for the category at the Sydney Telstra 500.

Thompson led the 17-lap race from start-to-finish, with fellow front-row starter and eventual second place finisher Nick Percat unable to do anything about the Triple Eight Commodore.

The final margin between the pair was just 0.9s thanks to Thompson taking it easy over the final two laps.

Starting from the rear of the grid thanks to a mistake at the Turn 6/7 chicane in qualifying this morning, McLaughlin steadily went about making up ground throughout the race – eventually moving into the Top 10 with three laps remaining.

The Safety Car was required on the very opening lap, after Rodney Jane and Marcus Zukanovic made heavy contact with the concrete walls between Turns 1 and 2. Both drivers emerged unscathed, despite their cars receiving significant damage. Daniel Jilesen joined the pair on the retirements list, with the Kiwi having encountered brake issues mid-race while running an impressive fourth.

Robert Cregan also encountered dramas, as contact with the tyre barriers at Turn 9 required a trip to the pitlane to remove a damaged rear-bumper.

Taz Douglas’s rear-bumper meanwhile received a tap from Paul Morris at Turn 12 – sending the Fastaz Commodore from sixth to an eventaul finishing position of 14th.

Morris emerged unscathed to finish seventh, one plan behind Tim Blanchard, who kept out of trouble to move up from his 10th place starting position.

Tom Tweedie failed to take the start following his contact with the Turn 12 exit wall in qualifying this morning.