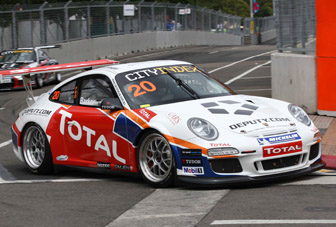 The reigning Formula 3 Australian Drivers’ Champion will be joined on the front-row of the grid by Steve Richards.

After being pipped by Michael Patrizi in the final session yesterday, Barker went one better, edging out Richards by less than 0.1s.

The first race of three Carrera Cup races will be run at 1405 today.