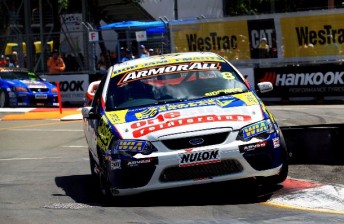 Ryal Harris has closed dramatically on points leader Chris Pither heading into the final day of the 2011 Auto One V8 Ute Series protected by Armor All.

Harris finished second to fellow Ford driver David Sieders in Race 1 of 3 at the Sydney Olympic Park Street Circuit, while Pither slipped from the lead to an eventual 10th place finish with a slipping clutch.

The Ice Break Holden pilot’s day had begun with a terminal engine problem in qualifying that necessitated a change before the race.

“I learnt my lesson during the last round not to be over aggressive, so I was happy with second, and even happier that Chris fell back through the field – at least we have closed the gap going into the final two races,” Harris explained after the race.

“The pressure is on him now, as I have nothing to lose and anything can happen in the final two races.”

Johnson was fourth, despite having endured a heavy qualifying crash at the fast Turn 5, while Jack Elsegood, Cameron McConville, Rhys McNally, Charlie O’Brien, Andrew Fisher and Craig Dontas rounded out the top 10.