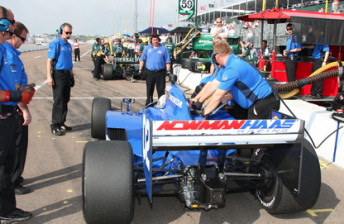 One of the most famous teams in Indy-style racing has withdrawn from next season’s competition.

Newman/Haas Racing, a mainstay in IndyCar since its founding in 1983 by Carl Haas and Paul Newman, announced that it will not enter cars in the 2012 IZOD IndyCar Series.

In a statement, Haas said that a shortfall of budget has forced the team awe from the sport.

“The economic climate no longer enables Newman/Haas Racing to participate in open-wheel racing at this time,” Haas said in a statement.

IndyCat CEO Randy Bernard says that the absence of the famous team will leave a major hole in next year’s field.

“Newman/Haas Racing is a first-class organisation that has left an indelible mark on our sport including eight championships and 107 race wins,” he said.

“We will miss having them at the track next season.”

The team joined the IndyCar Series full time in 2008. In September of that year, co-owner Newman passed away.

This past season, Oriol Servia finished fourth in the IZOD IndyCar Series championship and James Hinchcliffe earned the Sunoco Rookie of the Year award.

It accumulated 107 race victories and 109 pole positions during its time in competition.