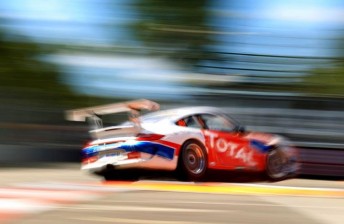 British young-gun Ben Barker has taken his first win in the City Index Porsche Carrera Cup on the streets of Sydney Olympic Park.

Having scored pole position earlier in the day, Barker traded the lead with second-row starter Craig Baird during the early stages before eventually pulling away to win by 1.6s.

Max Twigg was the first Elite Class driver home in seventh place, while the hard luck story of the race was Steven Richards, who caused an early Safety Car by stopping with clutch problems.

“I’ve been waiting the whole season for this win and I’m stoked to get it in the last round, and at my new home circuit,” said Barker after the race.

“Getting a race win was definitely one of the goals for the year, but we were realistic as there are a lot of experienced Porsche drivers and this is only my first year in a tin-top car.

“I’m now confident going into tomorrow. The car was great and I’m in the right head space, so we’ll see what we can do.”

Race 2 for the City Index Carrera Cup Australia will kick off at 935 local time, before the final race of the season at 1145.