Lowndes ‘confident and ready to go’ for finale

Lowndes ‘confident and ready to go’ for finale 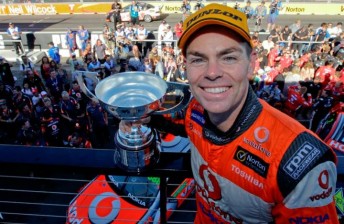 Craig Lowndes says he is primed for a final race title showdown with team-mate Jamie Whincup after taking victory in Race 27 this afternoon.

Lowndes closed the margin from 188 to 83 points by scoring TeamVodafone’s first ever win on the streets of Sydney Olympic Park, while Whincup limped home 20th after a midrace crash.

Whincup had survived several close encounters with Shane van Gisbergen during the opening phase of the race, before kerb-induced damage saw his right-front damper break in the Turn 5 sweeper – resulting in heavy contact with the outside wall.

Lowndes had started today’s race from 10th on the grid after making a mess of his Top 10 Shootout lap.

The three-time champion bent the differential housing of his Commodore on the Turn 1 exit wall, before spinning at Turn 12 in what he described as his ‘worst ever’ Shootout performance.

“I buggered up the Top 10 quite dramatically, and after that I was a little bit low,” admitted Lowndes after the race.

“But after that I was able to sit back and refocus on what I could do.

“My focus today was to bring that gap down to make it a contest tomorrow and we’ve been able to do that. (Closing the gap by) forty points would have done it, but 105 was a lot better.

“I think we’ll be able to put on a good show tomorrow. Whether that show will be good enough to win the championship, who knows?

“I know Jamie pretty well and he’ll be gutted. Rarely he makes the same mistake twice and you can put the team in that same boat.

“The cars will get a very thorough look over tonight considering what’s happened today and no doubt every nut and bolt will be changed if need be.

“Tomorrow will be a very hard fought race, there’s no doubt about that, but I’m confident and ready to go.”

An awkwardly-timed final Safety Car period left much of the field marginal on fuel late in the race, resulting in a heart-stopping finish for the TeamVodafone crew.

“There wasn’t too much left in the tank – we were all a little bit nervous in the last few laps,” said team manager Adrian Burgess.

“We thought we were safe, but we had a bit less than what we thought. But it was enough to get the job done today.

“Hats off to Craig for managing the gap and the fuel, and to the engineers as well who were doing the numbers in the background. It was a great team effort.”