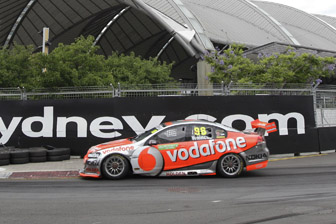 Jamie Whincup has taken provisional pole on the Sydney streets

Jamie Whincup will be the last man out in today’s Top 10 Shootout after topping the 20 minute qualifying session.

The TeamVodafone driver, who could win the championship this afternoon by finishing within sight of team-mate Craig Lowndes, will be aiming to equal his all-time record of 10 poles in a season when the Shootout gets underway at 1125 local time.

The 28-year-old sat at the top of the order after the first runs had been completed, recording a 1:28.11s lap before heading to the pits for a second set of tyres.

While Will Davison shot to the top by 0.29s with eight minutes remaining, Whincup fired back with a 1:27.49s effort – leaving the two-time champion to spend a nervous final four minutes watching on from the garage.

Davison improved to 1:27.60s on his last lap to cement second, while team-mate Mark Winterbottom was third having struggled with oversteer in the Orrcon Steel FPR Falcon.

Johnson’s lose through the Turn 6/7 chicane changed the complexion of the session, as he moved the Turn 7 apex bundle onto the racing line.

Greg Murphy was 18th after also finding trouble on his first run – striking the Turn 1 exit wall in his Pepsi Max Commodore.