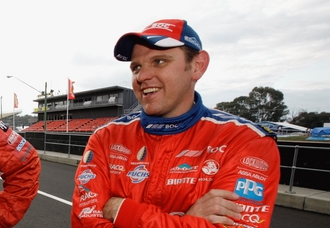 Jason Bright is confident his injured body will survive the tough Sydney Telstra 500 test this weekend.

Suffering from a fractured rib and strained abdominal muscles, Bright was rested in the last event at Sandown in hope of being fit for the Homebush finale at Sydney Olympic Park venue.

The #8 Team BOC driver performer strongly in practice yesterday, finishing in sixth and 18th in the final two sessions.

Wearing a karting-style rib protector, Bright says he feels he will be fit to make it through the twin 250km races, starting today.

“It wasn’t a problem in practice. I’m pretty confident I’ll be able to get through the races,” Bright told Speedcafe.com.

“There wasn’t any time on the track where I had any sharp pain. I could feel it, but I was feeling it a lot more from Phillip Island through to Symmons than what I’m feeling now.

“If anything, I expected it to be worse. I thought I’d be looking at ways to protect it more, or even have to get an injection, but I don’t think that will be the case.”

While he can feel the injury inside the car, Bright says that it isn’t slowing him down.

“I’m still firing it in there, running wide, making mistakes. I’d be surprised if it was costing me time. If it is, it’s hard to say.”

The only issue that might slow Bright this weekend is his fitness. Under doctors orders, he has been restricted in physical activity over the past two weeks. He admits he feels underdone.

“Fitness wise, the preparation has not been ideal,” he sayd.

“I was told not do anything that would flex the rib. I needed to make sure that the rib was healed as much as possible.”

Qualifying will be held today at 10.20am followed by the first leg of the The Sydney Telstra 500 at 3.05pm.