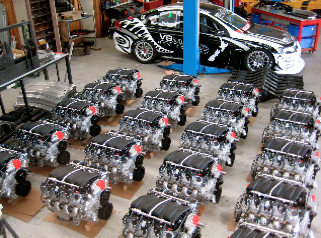 Twenty V8 engines have arrived in New Zealand, ahead of the new V8 SuperTourers season

The first batch of V8 SuperTourers engines have arrived in preparation for the new-for-2011 New Zealand-based championship.

The 20 Chevrolet engines were delivered to the Kumeu facility, on the outskirts of Auckland city.

Each engine will be partially striped to become a unique V8ST control specification. Each engine’s individual power and torque is measured on a dynometre to ensure parity. The dyno being used is the same Superflow bench that the Toyota Racing Series use to verify the power output of its engines.

A random draw will be held this Saturday to determine which teams get which pre-sealed and numbered engine, prior to the dyno certification process.

Meanwhile, chassis and all other components required for the final race cars continue to pour in to New Zealand, with 14 Pace Innovations-designed chassis complete.

V8ST CEO Paul Radisich says that other than a small delay with shipping, the category is on track for its February debut at Hampton Downs.

“Apart from any delays caused by some rolling wharf strikes, which we are unsure of how long they will continue, we should have every single nut and bolt here in NZ before Christmas,” Radisich said.

“As of this weekend, we now have 14 chassis in the country. Pace Innovations has done an absolutely outstanding job meeting the delivery schedules – in fact exceeding them as its turned out.

“Most teams should have their finished cars finished by mid-January, and shaken down by the end of January.

“This is a brand new car and Series so there will be little restriction in testing, providing they use the nominated home circuit. In fact, they can test for as long as their two set of allocated Hankook control tyres last!”