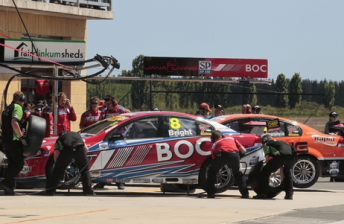 Brad Jones Racing co-owner Kim Jones says that his team is working on a deal to bring IRWIN Racing refugee Alex Davison to the Albury-based squad next season.

BJR, which took its first V8 Supercars Championship race wins at Barbagallo and Winton earlier this year, already has Jason Bright and new signing Fabian Coulthard under contract for 2012.

With Karl Reindler set to depart for Kelly Racing, it’s third entry however remains without a driver or major sponsor.

According to Jones, linking Davison with Bright and Coulthard would make for a formidable squad.

“If we were to have Jason Bright, Fabian Coulthard and Alex Davison in our team, we would have a very strong line-up,” Jones told Speedcafe.com. 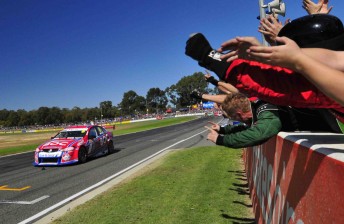 “That would be a really workable program, but it all boils down to having enough money to do that job properly.

“I don’t know whether we can financially manage that program. We’ll have to wait and see.

“Alex is running ninth in the championship, and you wouldn’t say that he has had a brilliant year. He is a very good option.”

Other drivers said to be in contention for the third seat at BJR, if the Davison deal is out of reach, include current driver Jason Bargwanna and Fujitsu V8 Series runner David Wall.

Jones says that he wants to see his team reach its potential.

“All we want in this team are people who can help motivate the team to help us reach our potential,” he said.

“This year, we’ve had six/seven podium finishes. We had a slump in the middle where we struggled. All in all, we’ve had a good year, but we need a whole year.

“If we have a year where we are competitive the whole way through, we could give the championship a shake, and that’s our main aim.

“I think having three drivers of that calibre would certainly make that team unit stronger.”

While the team is aiming to lock away its third driver as soon as possible, Jones says he won’t be concerned if a deal is not done until the new year.

“It is about being a manageable situation for us to get to Clipsal,” said Jones of finalising a deal.

“Keep in mind, the test is February 11, and you’ve got to give our staff some time off.

“It is certainly possible to finalise your deals in place at that point, but it just costs you more money to service it to get to the start line.

“We’re working very hard behind the scenes. I’d like to have a had this done six or seven months ago, but that’s not practical, so it will be done when it’s done.”