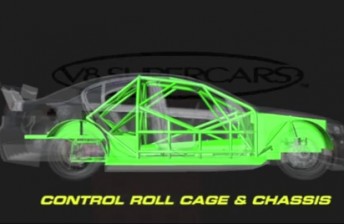 V8 Supercars has unveiled its new-for-2013 race cars – dubbed the Cars of the Future – but what are the differences between the current cars and the new machines?

For the casual V8 Supercars observer, the cars unveiled by Mark Skaife, Neil Crompton and a selection of V8 Supercars drivers this morning look no differnent to the current-spec race cars.

But while the exterior might offer little differences, the insides are a mix of modern changes – based on increasing market relevance and safety, while decreasing costs.

With special thanks to Triple Eight Race Engineering and Vodafone, Speedcafe.com presents the below video, offering a detailed look at the major differences between the current specification V8 Supercars and the COTF.

Triple Eight has been heavily involved in the COTF program, having won tenders to design control items such as the independent rear suspension and pedal box.

CLICK HERE for Speedcafe.com’s news story from the launch

CLICK HERE for Skaife’s view on more manufacturers joining the championship in 2013 and beyond.

See below for Speedcafe.com’s video of the future of V8 Supercars …