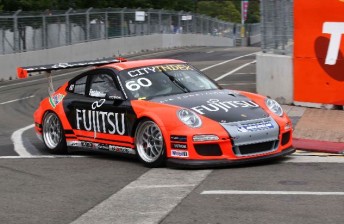 Nick Foster in the Fujitsu Porsche

Craig Baird has kicked-off the final City Index Porsche Carrera Cup round of the year in fine style, emerging fastest from the opening day of practice.

The Kiwi, who enters the decider with a healthy 151 point lead over fellow Kiwi Daniel Gaunt, set a best time of 1:30.56s in the morning session that proved unbeatable in the afternoon.

Michael Patrizi, who won the Bathurst round of the championship in October, ended the day just 0.29s away from Baird, while Ben Barker, Steven Richards and Gaunt rounded out the top six.

Fujitsu Cool Driver and Formula Ford graduate Nick Foster ended his first day as a Porsche driver in eighth fastest, and said he was pleased with his progress.

“I thought by the end of today we would be ahead of some of the Elite Class drivers, but I didn’t think we would be this far up this soon,” said Foster.

“I’ll approach tomorrow the same way as we approached today: go out there, go fast but keep the car off the walls.”

In the Touring Car Masters, it was another title favourite that set the Friday pace, with John Bowe heading Andrew Miedecke, Glenn Seton, Jim Richards, Brad Tilley and Bernie Stack after Qualifying 1.

Bowe leads Richards by 50 points heading into the final event, but is furthered advantaged when the drop-your-worst-round points system is taken into account.

The V8 Ute Racing Series is also enjoying its final round this weekend. The top three in the title race proved to be the three fastest men around the Sydney Olympic Park Street Circuit in practice, with Ryal Harris (2nd in points) a healthy 0.93s clear of David Sieders (3rd in points) and leader Chris Pither.

Charlie O’Brien, Grant Johnson and Cameron McConville rounded out the top six, while Auto One Wildcard Adam Macrow was 22nd.

Meanwhile in the Aussie Racing Cars it was Trent Young who paced the field – the Falcon driver 0.14s clear of Adrian Cottrell, with Peter Carr a further 1.1s adrift in third.