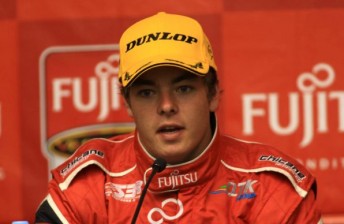 Stone Brothers Racing young-gun Scott McLaughlin will head into qualifying for the final Fujitsu V8 Supercars round of 2011 full of confidence after topping Friday practice.

Chaz Mostert gained almost a second on his Practice 1 time to be just 0.14s slower than McLaughlin by the end of the day.

David Russell and Jack Perkins ensured a Ford sweep of the top positions, while Andrew Thompson – who is poised to wrap up the title tomorrow – was 0.69s off the pace in fifth.

Of those to strike trouble, David Wall did minor damage to his Wilson Security Racing Commodore by tagging the wall at Turn 11, while Nick Cassidy lost crucial track-time with a front-suspension failure.

See below for the combined result from Practice 1 and 2