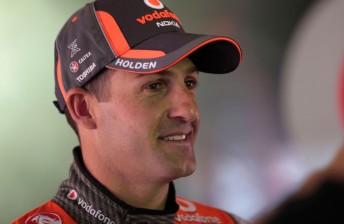 On the eve of the championship deciding races at the Sydney Telstra 500, Jamie Whincup has highlighted the two major motivations behind his 2011 title assault.

Whincup enters the event 188 points ahead of Craig Lowndes, and will wrap up the title with a top four finish tomorrow – even if his team-mate scores maximum points.

Whincup secured both the 2008 and 2009 V8 Supercars Championship crowns on the penultimate day of the season, but saw his 2010 campaign falter during the opening leg of the Sydney event thanks to a multi-car crash.

The 28-year-old however says losing last year has, along with his desire to win titles in multiple brands, been key in remaining motivated for this season.

“It re-motivated me for this year to raise the bar and improve myself.

“Then there’s Ford and Holden – trying to win the championship in both types of cars. Maybe we can do (win with) three or four (manufacturers) in the future, who knows… I don’t want to get too far ahead of myself. (CLICK HERE for Speedcafe.com’s story on the plans to introduce more marques from 2013).

“It’s still a long weekend ahead, and with 10 different people having taken the 12 podium places here over two years, clearly it’s a tough event.”

Having previously expressed concern that his extensive list of pre-event sponsor and media commitments prior to the season finale has proven unhelpful in the past, Whincup says he’s primed and ready to go for this weekend.

“It’s a massive week, it always is, but my team has done an excellent job of filtering all the bad stuff out of the week,” said Whincup.

“Although it’s not perfect, we’ve come a long way from where we were last year and the year before. This year I’ve actually got a little bit of energy to drive the car and do a good job.”