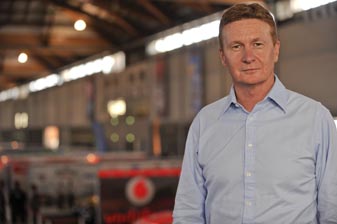 His appointment sees Shane Howard relieved of his role as acting CEO, returning to his long-time position of chief operating officer.

Malone was seen in the Sydney Telstra 500 paddock with V8 chairman Tony Cochrane and Archer Capital’s Brad Lancken this afternoon, being introduced to various V8 Supercars team owners and identities.

Malone says that he is looking forward to the challenge of taking V8 Supercars to the next level.

“I am excited to be joining the highly successful V8 Supercars organisation,” Malone said.

“The team has built an extraordinary sporting franchise over the past 15 years and I am committed to delivering on the numerous growth opportunities that the business now has.”

V8SA Chairman Tony Cochrane said that he was pleased to have Malone.

“The board of V8SA is delighted to have secured David as the organisation’s new CEO,” Cochrane said.

“His background and relationships will be invaluable as V8 Supercars advances its strategic development plan.”

Malone was CEO of Premier Media Group since December 1999, leaving the company earlier this year. He previously worked at Multi Channel Network.

In March, Malone was awarded the ASTRA Pioneer Award for his significant contribution to the Subscription Television industry.

At PMG Malone oversaw the Fox Sports 1, 2 and 3, Fox Sports News, Fuel TV and SPEED networks, which are broadcast through the FOXTEL and Austar services.