Skaife and Crompton to drive COTFs in Sydney

Skaife and Crompton to drive COTFs in Sydney 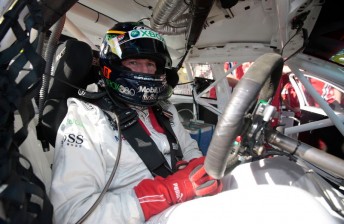 Mark Skaife and Neil Crompton will drive V8 Supercars’ Car of the Future prototypes in their first public appearance at the Sydney Telstra 500 tomorrow.

Built by Queensland engineering firm Pace Innovations, the two cars have been freshly stickered for the launch, following their most recent testing appearance at Winton last month.

Featuring major signage from V8 Supercars partners Dunlop and Dick Smith, the cars will complete laps of the Sydney Olympic Park Street Circuit, with Skaife set to take a competition winner along for the ride.

While Skaife is the ‘independent’ chairman of the V8 Supercars Commission, it is expected that the five-time series champion will drive the Holden, leaving Crompton to the Ford.

The unveil will take place at the Dome end of the V8 Supercars paddock in Sydney Olympic Park, opposite Dunlop’s site.

While V8 Supercars has been bullish on the ability of the new rules to attract additional manufacturers to the class, those anticipating the announcement of a new marque tomorrow can expect to be disappointed.

CLICK HERE for Speedcafe.com’s Spy Pics of the COTF prototypes testing at Winton, complete with the new 18-inch wheel and tyre package

CLICK HERE for more on the engine regulations for the COTF